Indian markets may rally to 5300 levels in next 2 months 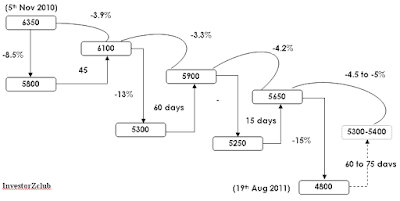 1.      InvestorZclub believes that  we are in bear market as the Indian market has been making lower tops and lower bottom since Nov 2010. Considering the global macro factors we should expect this bear market to last for an extended period of time.
2.      The fall from the recent peak from 5650 to 4800 has been close to 15% in a short span of 45 days. Hence a bounce back is expected sooner than later.
3.      InvestorZclub believes that we have made a short term bottom at 4800 on 19th August and should see a pullback rally towards 5300 to 5400 levels in next 2 to 3 months which would be approximately 5% below the previous peak of 5650.
4.      The expectation is based on the previous pull back rallies that has happened since past 1 year in which the pull back rally has topped at a level 3 to 4% lower than the previous top made by nifty. Since the recent fall has been greater in magnitude we expect that the rally may top out close to 5% below the top made by nifty at 5650.
Hence Investors and traders can position themselves in the most beaten down sectors to play on the upcoming rally. But it should be remembered that in the journey towards 5300 - 5400 a retest of the recent low of 4800 nifty level cannot be ruled out in next 1 month.
*  The figures have been approximated for the sake of calculation.
at August 23, 2011
Email ThisBlogThis!Share to TwitterShare to FacebookShare to Pinterest
Labels: current market view, Investment Idea, Trading Idea