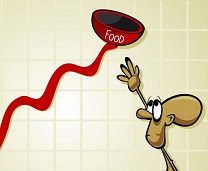 The food price index rose to six month high level at 10.05% and the fuel price index climbed 12.55% in the year to Aug. 20. In the previous week, annual food and fuel inflation stood at 9.80% and 13.13% respectively.
The primary reason for such high food inflation numbers could be uneven rainfall in some parts of the country which created temporary shortfall in supply of food items. In west Bengal some of the vegetables were being sold at 400% higher prices than their average selling prices.
The Reserve Bank of India has raised interest rates 11 times since March 2010 to tame headline inflation, which stood at 9.22% in July.
Indian economy has already slowed down to 7.7 %, as per the latest GDP data, which might restrict RBI to go for another rate hike as it could slowdown the economy beyond acceptance. Also this time RBI might choose to adopt a wait and watch strategy as the global commodity prices are also expected to fall which could ease some of the inflationary pressure.