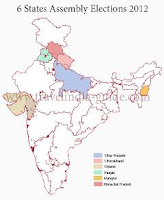 Indian Stock Market witnessed volatile movements in the morning until the clear consensus emerged during noon that SP is going to come in UP with full majority.
Initially when the markets opened at 9:15 A.M it went up based on a hope that Samajwadi Party might not get full majority and could pull in Congress to form the government in UP. But as the day progressed it became clear that SP would get full majority and won't require congress support. That made the Indian stock Markets very nervous and SENSEX fell more than 550 points from the highs of the day.
So what were the reasons for nervousness and what's the future?
1. With this defeat in UP and Punjab, UPA has become vulnerable to split where TMC and DMK are the major threats which could imbalance the government in centre and, who know, create a situation of mid term polls
2. The budget 2102 is now expected to be more of populist rather than economic. Consensus would suggest the Congress will get more cautious; i.e. effectively hand out more sops resulting in further fiscal slippages and move further away from reform – a mix that will be negative for the Macro.
at March 06, 2012
Email ThisBlogThis!Share to TwitterShare to FacebookShare to Pinterest
Labels: Indian Stock Market, state elections