BSE FMCG index has gained 22 per cent since January 2011 even as the Sensex lost 15 per cent in that period. The index has been consistently making new all time highs in the month of March and April 2012. 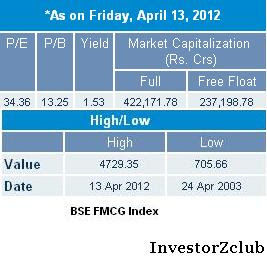 In 2007, the FMCG index had only a narrow premium over the PE of the broader market. In April 2007, for example, the FMCG index traded at 21.5 times, the Sensex was at 18.7 times and the BSE 500 at 16.8 times.
The gap in valuations of FMCG index, sensex and broader BSE 500 remained narrow from 2005 to 2009 but the premium began to rapidly inflate from 2010 onwards. The BSE FMCG index is now at a price-earnings multiple of 35 times. In contrast, the BSE Sensex trades at 17.6 times, and the broader BSE 500 is at 19.1 times (see the image above).
If one looks at the business model of the FMCG companies closely, it would become clear why the stocks of these companies are in high demand and trades at hefty premium.
1. The FMCG companies operate on very low debt. Most of them are infact cash rich with zero debt. This is a distinct advantage in a world of high interest rates and heavy interest outgo telling on profitability of other sectors.
2. Return on equity has been in excess of 20 per cent in the past five years for FMCG companies.
3. Operating profit margins for FMCG companies have averaged a minimum of 20 per cent over the past five years.
4. They have good pricing power due to the fact that the products that they sell are for frequent use such as soaps, toothpastes, hair oil, detergents and so on which are low ticket in size and the consumption doesen't fall for them on slight increase in prices. Marico, Dabur, Hindustan Unilever, Emami, GSK Consumer Healthcare, Godrej Consumer Products and others have effected price hikes and managed to sustain volume growth as well.
Marico's PE at the start of 2005 was 16 times, against behemoth HUL's 29 times. The former's valuations rose to 28.4 times six years later, while the latter's inched up marginally to 29.1 times trailing earnings. ITC's sedate multiple of 18.7 trailing earnings in 2005 ran up to the current 30.5 times.
With strong rural demand and good penetration of FMCG companies in these markets, the future of these comapnies look even brighter. There might be slight correction in stock prices in coming months due to recent runup and high valuations, but it seems distant that they will get de-rated significantly any time soon and investors will be able to grab them at sub 20 PE levels.
at April 15, 2012
Email ThisBlogThis!Share to TwitterShare to FacebookShare to Pinterest
Labels: Analysis, FMCG, Stock Market Lessons