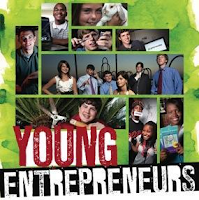 We all know that entrepreneurs carry different genes that distinguish them from the 99 percent of the population who just wish to work for somebody else throughout their life to lead a constant life. Entrepreneurs take risk and choose to ride a bumpy road to achieve a greater goal for themselves and the society at large. Age is never a bar for this rare breed and following are some of the examples which demonstrates how these young entrepreneurs became successful at such tender age.
Andrew Hsu : Co-Founder of Airy Labs, a business that creates social learning games for children. Hsu has managed to snare $1.5 million in seed funding for Airy Labs. He was a graduate of the University of Washington by 16.
Savannah Britt: Owner & Editor in Chief of Girlpez Magazine. She is the "Youngest Magazine Publisher in the World." The magazine has been seen and endorsed by some of the top people in the industry such as Amy Astley, the editor in chief of Teen Vogue.
Farrhad Acidwalla: CEO and founder of “Rockstah Media” - a company dedicated to  providing cutting edge solutions to web  development and brand development, both online and offline. Within a few months Rockstah has started to take the online world by storm and has won accolades from its clients.
Laurence Rook : A 13-year-old boy from south London has invented a doorbell which calls the householder if nobody answers the door. The doorbell, with a built-in Sim card and an intercom, calls the householder if no-one answers the door within eight seconds, allowing the visitor to speak directly to the householder. Laurence has already received orders worth up to £250,000.
Anshul Samar : Anshul Samar is the CEO and founder of Alchemist Empire, Inc. and the creator of The Elementeo Game, a chemistry card game that helps students explore chemistry through gaming. Anshul began prototyping and building Elementeo in sixth grade and launched it during his first year of high school.
Philip Hartman : Philip is a home-schooled high school senior at the ripe age of 15.  He won the 2008 Young Inventor of the Year award for inventing a new system for fusing optical fibers. His latest invention emits steam onto a windshield and is capable of defrosting a frost-covered windshield in about 15 seconds.
TIM CHAE: After dropping out of college to launch social media marketing agency PostRocket, Chae found that his age was a barrier to striking out on his own, telling Reuters that he had to get his father to co-sign a lease on an apartment.He is now part of the celebrated 500 Startups programme and is a vocal advocate of the innovation provided by young entrepreneurs.
Seth Priebatsch: At 18, he launched PostcardTech, which offers interactive marketing tours for CD-ROM, and three years on he was backed by Google Ventures to create SCVNGR. Priebatsch describes SCVNGR as “part game, part game platform.”. Players take part in the game by completing tasks in the real world – an opportunity that has been seized upon by marketing-savvy small businesses.
Daniel Gomez Iniguez: Notching $3 million revenue in your second year is a decent achievement for any business, especially one that is headed by a 20-year-old. Mexican entrepreneur Iniguez started Solben in 2009 as a non-profit that creates biodiesel production technology. Iniguez expanded the idea to a global marketplace.
Stanley Tang : Tang has worn the title of the world’s youngest bestselling author, after his eMillions book shot to the top of the Amazon charts. He was just 14-years-old.He is currently a student studying Computer Science at Stanford University.
at July 11, 2012
Email ThisBlogThis!Share to TwitterShare to FacebookShare to Pinterest
Labels: Post by Nishant Tyagi, Teen Entrepreneurs