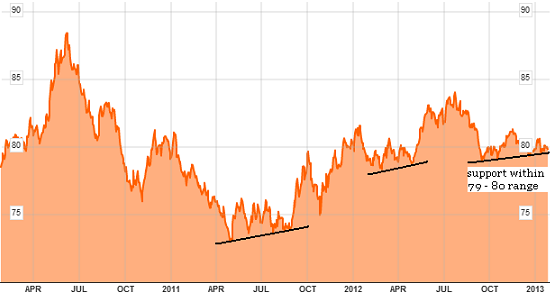 Technically the dollar index chart is suggesting significant support for the index at 79 levels considering the distribution pattern being formed in past 4 months. If you notice the chart given above, similar kind of slightly inclined distribution pattern was being formed couple of times before as well from where the index rebounded significantly.


Not only technically but fundamentally as well things are in place to support the index from falling further significantly. By composition dollar index is calculated by factoring in the exchange rates of six major world currencies: the euro, Japanese yen, Canadian dollar, British pound, Swedish krona and Swiss franc and thus the movement of the index is linked to the economic activities happening in the respective countries.

Euro, Japan, and UK continue to provide easy monetary policy while the era of loose monetary policy will slowly fade away for United States going forward as they strive to resolve the huge pile of debt they have acquired in past 4 years. Also the US economy is in much better shape in terms of employment and GDP growth than it was couple of years back which will naturally support their currency.

So overall outlook seems good for USD with one caveat that if Congress and democrats couldn't reach an amicable deal to provide a road map for gradual debt reduction and automatic spending cut becomes effective from 1st March 2013, there could be a significant sell off in US equities and dollar index. But the probability for this seems quite low as the stakes involved are way to high. On the other hand if a deal is reached and we get a proper sensible debt reduction plan then there could be a 5 - 10 percent rally in dollar index and S&P 500 from current levels.

Your view on this topic in comments below will be highly appreciated.
at January 26, 2013
Email ThisBlogThis!Share to TwitterShare to FacebookShare to Pinterest
Labels: Analysis, Dollar Index