Educomp Solutions: The rise and fall of the euphoria

Educomp Solutions is another example of investor's exuberance and irrational behavior which, like others, ended in blood bath. So what went wrong with Educomp and why it went up crazy and then crashed? Lets take a brief look at the timeline:

22nd Dec 2005 - Educomp Solution IPO (issue price = Rs 125) closed got hugely oversubscribed on projected education boom in India. At Rs 125 the company was valued at a reasonable market value of Rs 200 crores. The Face Value of each share was Rs. 10 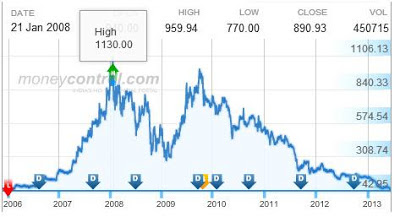 28th Mar 2006 - The stock price touched 400 level and a PE valuation of more than 45. People started talking about exponential growth in the multimedia educational product of the company and justified high valuation.


21st Jan 2008 - The stock touched Rs 5650 and a market capitalization of around Rs.9000 crores. This was the peak for the stock and Indian stock markets in general when the US crisis hit the world. At 5650 the stock was valued at PE multiple of crazy 80 times as the company reported Rs 70 crore of Net profit in FY-08. In FY-08 also the company doubled in net profit.

30th Mar 2009 - The stock traded at Rs. 2200 and a PE valuation of 25 times as the company reported Rs 140 crores of profit in FY-09 and continued the trend of doubling it's net profit. Here people continue to believe that the company will double it's profit every year. This is where people failed to realise the importance of competitions. Educomp was not doing something that nobody else could do and clutch of players started entering the multimedia eductaion market. 100 percent rise in net profits every year attracted many strong players like Tata.

5th Oct 2009 - The stock price went to Rs 5000 again when it topped out and started falling thereafter. There were some rumors about bad corporate governance in the company as well during that time.

27th May 2010 - The stock crashed to 2300 levels (pre split price) a fall of more than 50% in 7 months on concerns over high valuation and future growth. The company started investing huge capital in setting up its own K12 Schools under the Millennium brand and Pre-schools under Roots-to-Wings (own) and EuroKids (JV) brands.

29th Aug 2011 - The stock touched a low of Rs 1000 (pre split price) a fall of another 56% in 15 months. The post split price was Rs 200. This was mainly due to issue of artificially reporting higher net profits because of transfer of old SmartClass. BOOT contracts to the new securitization model. Market became skeptical about the window dressing of the profits and the valuations crashed. The company reported Rs 333 crores of Net Profit in FY-11 and at 1000 bucks the stock was valued at just 5 times FY-11 EPS.

31st May 2013 - The company posts a net loss of Rs 148 crores and the post split stock price touched Rs.60 and the market valuation of around 700 crores. The company which was reporting 100% rise in profits each year reported loss which confirmed the wrong doings in the company and failed business model.

6th Jun 2013 - The stock touched a low of 43 and has been freezing in lower circuits since 31st May. From a market value of 9000 crores the company's value came down to just 500 crores a fall of 95%. Investors paid the price of euphoria and investing in less known management.


Moral of the Story:

1. Be wary of companies which shows 100% growth year on year.

2. Avoid stocks which are hot and is on everybody's radar.

3. Avoid stock with very high valuations being justified with future exponential growth. The growth might not come and you get caught on the wrong side.

4. Don't buy a stock if the management track record is unknown or bad.