CLSA recent report on TCS stock price target of Rs 2200 in medium term and it's potential to attain a market value of $100 billion over next few years is very misleading for investors in general as they might get into the stock at current levels which is exorbitantly high in our view.

We believe all the good news in terms of currency depreciation and U.S recovery are largely discounted in the stock prices of all the IT companies in general as they have outperformed Nifty by as high as 50% since the start of this year. 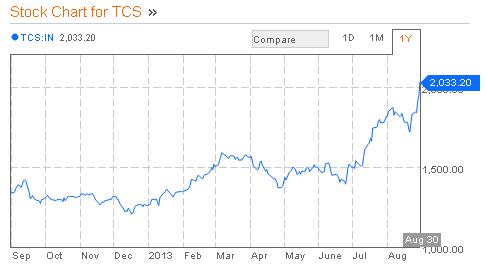 CLSA is recommending a stock which has gone up 20% in 7 trading session from 22nd Aug 2013 to 30 Aug and around 50% in 2 months from June end to August end. 20% and 50% upmove might not be very high for a small or mid sized company but for a company of size around 3,96,000 crores it is huge. In two months since the end of June this year it has added more than 1.2 Lakh crores of market value equivalent to entire Wipro.

Here are some numbers and charts regarding TCS Valuations:

Investors who get into TCS at current levels will take some very high risks as the risk-reward ratio is very unfavorable now:

1. TCS net margins could contract to industry average in coming years due to higher competition from next 4 big players and higher tax outgo.

2. Pricing pressure inevitable due to competition and client asking better rate because of sharp depreciation of INR vs USD, EURO and GBP.

3. U.S immigration bill could bring in some unwanted clauses by year end which could impact the costs of IT companies in India in general and TCS in particular.

5. Technically also the stock has gone up by 20% in July and 12% in August (closing basis) on below average volumes of 28 and 30 million shares respectively which doesn't suggest high conviction buying. Ideally when very large cap stocks move up 20% or 30% in a month or two on genuine buying interest it happens on above average volumes.

Note: There is no doubt that TCS is a very strong company but it does not qualify as a strong investment at this point of time purely on the back of over valuation and over ownership. Investors should take informed decision and not jump on any stock based on recommendation from some high profile brokers as those brokers might have vested interest in it. In short term, due to technical factors, TCS might touch 2200 but any wise investor should stay out of the stock and only consider the stock after immigration bill is finally passed and is available at least 20% cheaper from current levels. Existing investors are strongly advised to book profits and get out.