Since we recommended "Buy on Idea Cellular" around 2 years ago, the stock has gone up more than 160% and has overtaken Bharti Airtel as the most favorite telecom stock in India. Fundamentally also the company has one of the healthiest balance sheet with debt-to-equity ratio of 0.9, lower than RCom’s 1.2 and Bharti Airtel’s 1.44.

Idea is now the only telecom operator to have delivered positive returns to its shareholders in the past six years, including the 2008 market crash. At present, Idea’s stock price is 32 per cent higher than that at the beginning of 2008, when the stock market was at its peak.

In comparison, the Bharti Airtel stock has fallen by a third from its 2008 highs, while RCom’s has fallen 80 per cent during the period. Compared to the beginning of this financial year, Idea’s stock price has risen 76 per cent, while Bharti Airtel’s is up five per cent and RCom’s has appreciated 104 per cent. Operationally in the past six years, Idea has nearly doubled its share of the national wireless market. 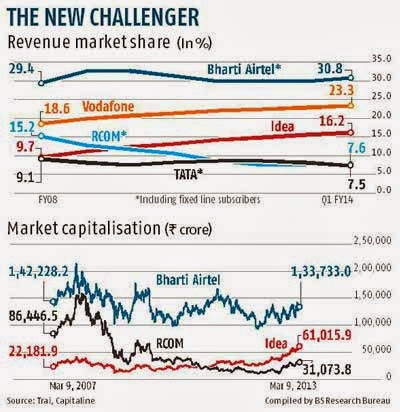 So what should one do with Idea Cellular Stock Now?

Existing investors who are into this stock since past couple of years can look to liquidate half of their holdings on further rise into the stock as that will lead to zero cost of the rest of the holding for them.

Others who entered late should book profits on any up-move as the stock is now quite richly valued at more than 30 times FY-15 earnings. Beside that there is potential for disappointment in spectrum auction from higher bid prices and increasing number of players in each circle.

Also Idea Cellular is expected to dilute equity through QIP issuance to fund the renewal of spectrum in upcoming months. So uncertainty  valuation richness and current euphoria around the stock, warrants any fresh purchase of the shares.

Ultra long term investors with stomach to see 20 - 30% erosion in stock price can continue to hold the stock, as being the third largest telecom operator in India, it has very bright prospects.
at October 13, 2013
Email ThisBlogThis!Share to TwitterShare to FacebookShare to Pinterest
Labels: Analysis, Idea Cellular