Share price of Cairn India has been relentlessly falling since past 10 months and made fresh 52 week low on 12th May 2015. The stock is down more than 48% from it's 52 week high and is trading at very attractive valuation (The stock trading at roughly 37000 crores mkt cap and the company as 17000 crores of cash as on 31st March 2015). Clearly irrational exuberance is playing here on downside and investors are dumping shares on fear and panic. But a closer look at the overall health of the company and it's valuation standing vis-a-vis global peers presents a compelling opportunity for medium to long term investors. Before comparing it's valuation against a large U.S based shale oil producer, some of the key points that go in favor for investing in the company at current price of Rs.198.

#3. Tax demand of 20,000 crores plus by IT department from Cairn India is highly exaggerated and I believe it might not have to pay more than 5000 crores (if at all it has to pay capital gain tax). Taking that into consideration, Cairn India is still trading at Enterprise Valuation of 25k crores (37k - 17k + 5k).

#4. India crude oil price has gone up 30% from bottom in past couple of months and is expected to rise further due to depreciation in INR vs USD and strength in global crude oil prices. Cairn Inda Q4 FY-15 oil price realization was roughly Rs.3000 while the crude oil price in India is already hovering around Rs.3800 per barrel as on 12th May 2015.

#5. EOG Resources, the largest U.S based shale oil & gas producer, which is expected to be impacted more severely than Cairn India due to collapse in crude oil prices, is trading at far higher valuation than Cairn India. Below is the valuation comparison among them on key parameters.

EOG Resources (data in $ except valuation):

Cairn India is trading at 1/3rd the valuation of EOG resources in-spite of being a net cash company and in my view is trading very cheap on both absolute and relative basis. Hence investors with 1-2 years time horizon can start accumulating the stock for at least 50% appreciation from current levels. 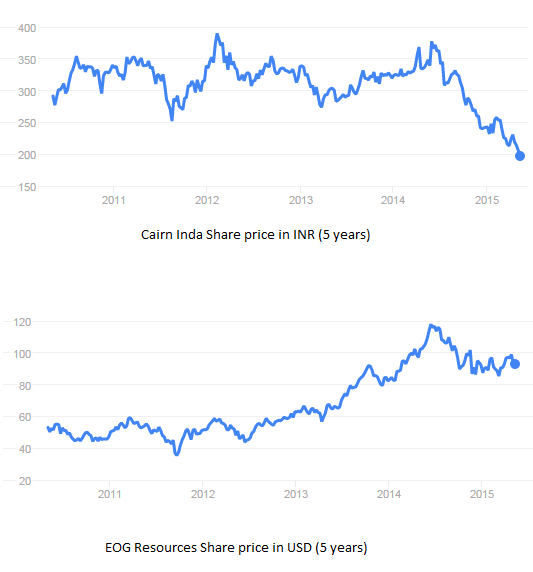 at May 13, 2015
Email ThisBlogThis!Share to TwitterShare to FacebookShare to Pinterest
Labels: Analysis, Cairn Inda, Investment Idea