Many people seem to be confused and worried these days regarding the volatile movement of Rupee vs. the Dollar, especially the IT Professionals and the exporters. I get query from many of my friends who have kept their dollar earnings in their foreign bank accounts hoping to get better exchange rate later. But the recent currency movement has left them scratching their head in anticipation of what to do now. The exporters are also affected but they have the ability to hedge their dollar receivables and are hence comparatively less exposed to these wild swings. I have been asked by many people about what is the future of dollar vis - a - vis the rupee.
Considering the current economic situation in India and worldwide, specially U.S, I believe we should see rupee stabilizing to depreciating from current levels of around 44.50. Some of the facts supporting such belief are:
1. Quantitative easing bottoming out in U.S: The interest rate in U.S have been kept abysmally low for quite long now, and the expectation of another round of easing and thus flushing of around $500 Billion by FEDERAL GOVT.  into the system to boost demand is already priced in the dollar. With no further easing visible in near future, the dollar is expected to start appreciating against other currencies in short to medium term.
2. Rate tightening topping out in India: The RBI was the first among all the emerging economies to reverse the easing process that was happening all over the world in 2008-2009. RBI has been slowly moving the interest rate up since the early 2010 to fight the Inflation Daemon. This rate tightening has started to slowdown the overall economy now. The IIP data of August was unexpectedly low which has left D.Subarao scratching his head, as he is not left with many amours to fight Inflation and fuel growth simultaneously. With no expectation of further rate hike, the rupee will find it difficult to appreciate against dollar from these levels.
3. Widening Trade Deficit: The trade Deficit, which is total import minus total export, is now running at around $13 Billion a month. With oil rising above $80 recently the deficit is expected to get widened from here until and unless government starts incentivizing the export. But at 44.50 to a dollar our export competitiveness has come down considerably vis - a vis other emerging economies. This cycle is itself expected to put lot of pressure on rupee in next 6-12 months.
4. Indian Stock Market Stabilizing: The SENSEX and NIFTY has appreciated a lot in last 2 months. Coupled with the rupee appreciation the FIIs who were lucky to enter India at the start of the year have made double gains. Seeing this many more FIIs started coming recently hoping to reap double benefits of both Equity and Rupee appreciation. But unfortunately both of them seem to be exhausted at these levels and the recent entrants have hardly made any money. So the Short terms FII money which came in to make quick bucks might start moving out and thus put pressure on both Rupee and Equities.
Note: Currency movement is dependent on infinite number of factors and cannot be predicted with high precision. But by reading the economic conditions one can take informed decisions on the direction and not get panicked by volatile movements.
at October 29, 2010 No comments:
Email ThisBlogThis!Share to TwitterShare to FacebookShare to Pinterest

There is lot of skepticism and fear among the people on the street. The crash of 2008 has left an impression on investors which is horrific and tough to forget. But where would people invest if not equities. People who remain hibernated till today have the leftover feeling now and trying to renter the market, but market this time is not obliging them. Most of the falls that are happenning are very shallow and tough to time it. This time the market is diametrically opposite to what it was in 2008.

The biggest difference is that the valuation that the sensex was trading at 20000 in 2008 was close to 25 times, whereas this time when sensex is at 20000 it is trading at a comfortable valuation of less than 20 times its estimated earnings.

The other noticable difference is the fear and skepticism prevailing in the market today. In 2008 there were wide spread optimism and everyone who was in the market was making money without any effort. I myself know many people who left their job as they were making much more money in the markets then their job, and they were new investors. I was myself making lot of money and started thinking that all the investing principles I have learnt are so easy to apply and forgot the basic principle that success without effort & experience is a house build of cards and would collapse even with a slight headwind. And that is what exactly happened. Subprime crisis came in just when we were at bubble kind of valuation and when no body was expecting such blowout news. People panicked and pressed the exit button. Then the situation was similar to the situation of a stampede in a temple full of crowd. There was blood bath every where. But things are different this time around. People are well prepared for any catastrophic news, hedged and under invested.
99% of the people have not been able to participate in the rally from 8000 to 20000. they are now waiting for a chance to get in and that is why every dip is being bought immediately.

All these factors would prevent a major correction in the markets and every dip would be bought by the new investors. 10 to 20% fall is possible in any kind of market but a crash seems to be not happening in near future. It seems from the market movement that it will spend sometime near 20000 and would slowly move up. The mid caps and small caps would eventually catch up and would outperform the large caps over the next 1 year.

So the best approach now would be to selectively look for quality stock available at cheap valuations and avoid investing in hot stocks available at rediculous valuations.
at October 26, 2010 No comments:
Email ThisBlogThis!Share to TwitterShare to FacebookShare to Pinterest
Labels: PE, SENSEX, Stock Market, Valuations

Cooling will make it hot soon!

Lloyd electric and engineering an Airconditioner coil manufacturer is the largest producer of coils used in all types of ariconditioners, domestic or industrial. It also manufatures complete air conditioner units on contract basis. Almost all the leading players in India such as Voltas, Blue Star, Hitachi, samsung etc are its clients.

Demand for air conditioners are rising at exponential pace, and are expected to continue for next few years thanks to global warming and rising income of Indian people. The company is diversifying into Metro rail airconditioning which is likely to give boost to order book thanks to Metro rail expansion in various cities in India.

At the CMP of 78 the stock is available at less than 5 times its current year earnings which is extraordinarily cheap with respect to other air conditioner players in the market such as Hitachi, voltas, blue star etc as these companies are trading at somewhere close to 15-25 times its current year earnings.
The company's FY-09 book value was approx Rs 132/-. For the current year i.e FY-10 the BV is expected to be around 147. so at CMP the stock is available at 0.53 times or 47% discount to its book value.

Considering the industry it is part of and the kind of low valuation it is trading at, the stock is expected to generate around 80% return from these levels in 6 to 12 months time.

So this cooling business is expected to make Lloyd Electric & Engineering a hot stock on dalal street soon.
at October 24, 2010 No comments:
Email ThisBlogThis!Share to TwitterShare to FacebookShare to Pinterest

How the price of a stock is determined? 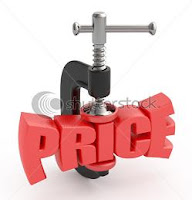 What determines the price of a share? This question bothered me a lot when I was first introduced to the world of Stock Market investing. Why some shares are trading at single digit prices while some are trading in 4 digits and some even in 5 digits.
As on 22nd october 2010 the market price of INFOSYS was 3050 and that of TCS was 1050. Both are part of the SENSEX and NIFTY index. Did you ever asked yourself why TCS is trading at 1/3rd of the price of Infosys in-spite of the fact that TCS is around 25% bigger than INFOSYS in terms of absolute revenue and profits. If you ask a layman investor to choose among them, he will definetly go for TCS as its ticket price is far less than that of INFOSYS.
Read more »
at October 23, 2010 No comments:
Email ThisBlogThis!Share to TwitterShare to FacebookShare to Pinterest
Labels: Stock Market Lessons
Newer Posts Home
Subscribe to: Posts (Atom)