"The safest way to double your money is to fold it over and put it in your pocket." - Kin Hubbard

"A bank is a place that will lend you money if you can prove that you don't need it." - Bob Hope

"Cocaine is God's way of saying you're making too much money." - Robin Williams

"Finance is the art of passing money from hand to hand until it finally disappears." - Robert W. Sarnoff

3 Mistakes that taught me the golden rules of Investing

In 10 years of my stock investing experience I have done many mistakes which caused me substantial financial losses but in return I learned some invaluable lessons that are now the fundamental pillars of my investing approach. Here are the top 3 mistakes and the lessons I learned from them.

Mistake # 1:  Over Concentration - During my initial days of stock picking I used to go overboard on one or two stocks and put all my money into them expecting an imminent explosion in stock prices and my invested capital. I invested significant proportion of my capital into names like Prithvi Information, Lloyd Electric, Paramount Communications during 2006-07. Guess what most of them went burst and are today down 90 to 99% from my purchase price. Though I managed to get out of them without loosing all of my capital but I still had to take more 40% knock on those names. I also had winners in the form of UCO bank, Zensar Tech etc but the gains in them were not sufficient to cover the losses. From then onward however confident I am, a stock never occupies more than 10% of my portfolio.

Lesson and Golden Rule # 1: Diversification equals Risk. Adequate diversification must to manage the risk of a portfolio. Never put all your eggs in one basket until and unless there is 100% chance of things happening in the way you want them to happen.
Read more »
at January 23, 2014 3 comments:
Email ThisBlogThis!Share to TwitterShare to FacebookShare to Pinterest
Labels: Stock Market Lessons 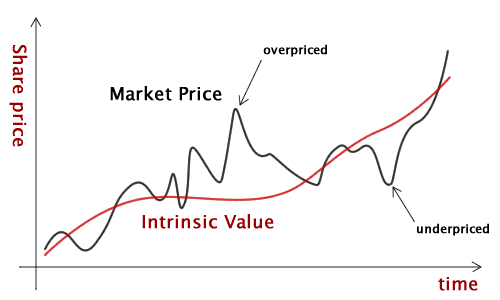 Value Investing is not a rocket science but an art that requires simple thinking, patience and asset owners attitude. If one can acquire these three skills he/she should not have difficulty in picking high performance stocks.

There are many text books available which can be read to understand how value investing is performed but to get things in nutshell and help you understand the practical aspect of this style of investing, following is a set of videos where in India's best known value investors discusses live on value investing framework and their individual strategies of picking winning stocks.
Read more »
at January 13, 2014 No comments:
Email ThisBlogThis!Share to TwitterShare to FacebookShare to Pinterest

With all the buzz and fuzz about Indian Oil Corporation divestment to meet the fiscal deficit target, IOC stock has been under continuous pressure for quite long. But with all the news flow it appears that govt. wants to sell the stake but at higher price. At current market price of around Rs.197, the stock is a bargain buy and available at a fraction of it's replacement cost. The stock is also trading near 3 year low. Hence there is high possibility that govt. might not go ahead with IOC divestment until price recovers.

Considering all these factors one can sell 1 lot (1000) IOC 180 put at current market premium of Rs 1.10 or higher to generate a return of 4.17% in 15 days. Even if the divestment happens now it is highly unlikely that the price will be set below 180.

For instance Britannia Industries appreciated by more than 84% in calendar year 2013 while at the same time JP Associates fell 44% during the same period. JP Associates is saddled with debt and had to do distress sale of it's cement plant in gujarat while Britannia Industries kept generating high Return on Capital and also witnessed 430 bps margin expansion in second quarter of FY-14.

Business Standard has compiled a very good list of key stocks which outperformed / under-performed along with highlights of reasons behind their performance. The doc is available for download in PDF below:
Read more »
at January 05, 2014 No comments:
Email ThisBlogThis!Share to TwitterShare to FacebookShare to Pinterest
Labels: Indian Stock Market in 2013

In general 2014 appears quite optimistic as far as performance of Indian equities are concerned. 2013 witnessed some major shocks in terms of currency, inflation and deficits which resulted in whipsaw movements in stocks and indices. Gross Corporate earnings in India has also not been encouraging so far. But in-spite of all bad macro and micro news flow in 2013, most of markets globally including Indian markets made new highs. Mutual funds sold more than Rs.75,000 crores worth of stocks in the year gone by while FIIs continued to pump in money and bought more than Rs.1 lakh crores worth of stocks.

During second half of 2013, QE tapering risk kept emerging markets on edge as none of us were able to estimate the impact it would have on capital markets. Finally after lot of suspense the QE tapering did happened and fed reduced the bond buying program by $10 billion. The market reacted positively as the quantum of tapering was low and it also signalled improvement in U.S economy.

So what to expect from Indian equites in 2014?

In a straight answer to this question, 2014 is expected to be optimistic and scale new high. But there will be no straight line movement and we will witness occasional correction on account profit bookings and unknown fears.
Read more »
at January 01, 2014 No comments:
Email ThisBlogThis!Share to TwitterShare to FacebookShare to Pinterest
Labels: Analysis, Indian Stock Market
Newer Posts Older Posts Home
Subscribe to: Posts (Atom)