Goldman Sachs has upgraded Bharti Airtel to buy from neutral and raised its target price on the stock of India's top mobile phone operator to Rs. 430

We expect the price target is conservative. The recent 2G scams are more likely to hit newer and unlisted player in the telecom space like UNINOR, Videocon, LOOP etc. This will rationalize the competition and would be favourable for the listed telecom player like Bharti Airtel. The tariff war seems to have bottomed out and the uncertainity in terms of its african operation is alomost over. Bharti is confident of it African operation turnaround in next 1 year. Most of the indian mutual funds have increase their stake in Bharti in last 6 months.

If Bharti reaches its target of 100 Million users in Africa by FY-12 then we exepect Bharti to report a Consolidated revenue of approximately Rs. 75,000 crores and PAT of around Rs. 12,000 crores in FY-13. Considering a PE multiple of 18, which is the forward multiple at which SENSEX broadly is trading at, then the market capitalization of  Bharti is expected to be approx.  Rs. 2,16,000 crores and hence the target price for Bharti is expected to be at Rs 560 in next 1.5 year. A near 70% appreciation from current levels of 335.
at November 24, 2010 No comments:
Email ThisBlogThis!Share to TwitterShare to FacebookShare to Pinterest
Labels: Bharti Airtel, Broker Bytes, Goldman Sachs

Zensar Technologies, a mid sized IT company, has announced the acquisition of Akibia Inc yeterday for cash of around $66 Million. Akibia Inc is a very niche player in Infrastructure managment space. With its acquisition, Zensar would be among top 5 Infrastructure Management Company in India. Akibia has centres in, Boston, in the US and in Europe and counts IBM, HP, AT&T, Goldman Sachs, and Verizon among its customers. Akibia did around $100 Million in revenues and around $9 Million in Profit last year.

Considering the niche space and the kind of revenue and profitability that Akibia has, Zensar has got an extremely good deal. Zensar has around $35 Million of cash which it will utilize in doing the acquisition.

With full year results of akibia getting integrated into Zensar from FY12, Zensar is expected to report a consolidated revenue of 1600 crores and a PAT of around 145 crores. The expected EPS is around 33.5. At a PE multiple of 10, the stock is expected to reach Rs. 335 in next 1 year time frame. So from the current levels of 160 there is more than 100% appreciation expected in the stock.

Update as on 16th August 2015: Zensar Technologies has become a huge multibagger and is up 6 times since the recommended prices of Rs. 160. 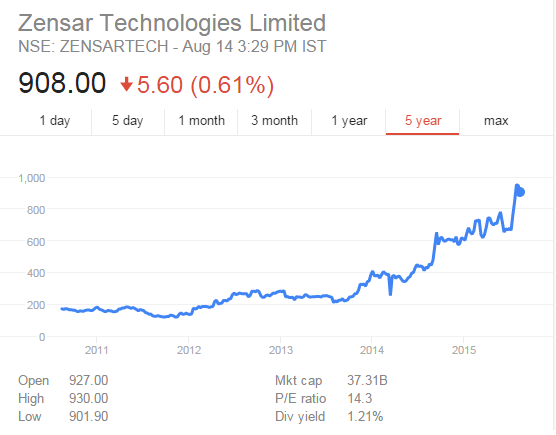 Indian stock markets have started showing some weaknesses on the back drop of FII outflow. Both SENSEX and NIFTY are down close to 2% in early trades today. The reason seems to be obvious. The rupee has depriciated by 2% in last 3 days and the SENSEX and NIFTY are down almost 4 % from the recent peak. So all in all there is a loss of 6% for FIIs in dollar terms. Since in short to medium term the direction of rupee seems to be downward, they might be worrying about further losses on currency side and that is why taking some money of the table before the majority of the gains get wiped out.

But this correction is healty as Mutual funds and Retail Investors have been out from the market and were waiting for corrections to get in. One should not panic by the volatile movement of the SENSEX and NIFTY and stay calm. A 5% correction from the current levels of 20000 SENSEX should provide good entry point for investors. However one should still follow bottom up approach of stock selection and buy where the business outlook is good and valuation is reasonable.
at November 16, 2010 No comments:
Email ThisBlogThis!Share to TwitterShare to FacebookShare to Pinterest
Labels: currency, FII, NIFTY, SENSEX

In the article titled "Cooling will make it hot soon" dated 24th Oct 2010 (http://investorzclub.blogspot.com/2010/10/cooling-will-make-it-hot-soon.html) I explained how undervalued is Lloyd electric and Engineering. Don't know about other investors but promoters seems to have read the article and started buying shares from the open market. On 10th and 11th Nov the promoters Mrs Renu Punj and M/S Lloyd electric and Engineering Pvt. Ltd have acquired 1.41% (around 4,38,000 shares at the rate of Rs.90/-). The stock has already moved 12% since I recommended it at Rs.78/-. Promoters have been steadily increasing their stake since last 6 months. If that is any indication the stock seems to be moving much higher from current levels in next 6 to 12 months.
at November 15, 2010 1 comment:
Email ThisBlogThis!Share to TwitterShare to FacebookShare to Pinterest
Labels: Lloyd Electric

Rakesh Jhunjhunwala has picked stake in Federal bank recently. He disclosed this in an interview. The reason seems to be very obvious, its undervaluation relative to the other private sector lenders like ICICI bank, HDFC, AXIS Bank, ING Vysya Bank etc.

The reason for its undervaluation in past 2 years has been its low retun on Net worth because of its right issue in 2007. But with loan book growing at 25% annually it is expected to report better RONW in coming years and hence should start commanding better valuation.

At expected PBV of 2.0 for the Financial year FY-12, the stock is expected to generate around 60 to 70% return from current levels in 12 to 18 months time frame.
at November 12, 2010 No comments:
Email ThisBlogThis!Share to TwitterShare to FacebookShare to Pinterest
Labels: AXIS Bank, Book value, Federal Bank, HDFC, ICICI bank, RONW

Today investors especially the retail investors who got subscription at 5% discount to the issue price of 245 must be very happy today as COAL India lists at 300 and touched an intraday high of 340. At 340 retail investors are earning close to Rs. 21,500 /- on each application. This is going to be an eventful day in the history of Indian stock market. The retail investors who had the leftout feeling in the recent rally of SENSEX from 8000 to 20000 have finally been able to make some money. This is crucial, for our markets because it is the retail investors who will bail out people who have been betting on midcap and small cap stocks, based on valuations, since very long but have hardly reaped any benefit. Because of FII money, the large cap stocks have been independently rising without the participation of mid and small cap and hence a huge valuation gap has been created between them.

After this episode of COAL India IPO, retail investors would now have some confidence of investing in the market again.
at November 04, 2010 No comments:
Email ThisBlogThis!Share to TwitterShare to FacebookShare to Pinterest
Newer Posts Older Posts Home
Subscribe to: Posts (Atom)