What is Dow Theory - Explains InvestorZclub 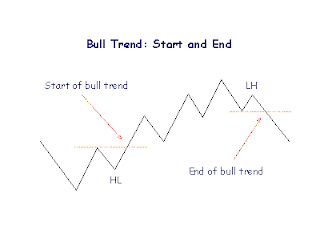 The Dow Theory says that the market has three simultaneous movements.
The most important movement is called the primary trend, which is a broad upward or
downward movement lasting usually for few years.
A secondary movement is called technical correction. This is a much shorter in duration and is opposite in direction to the primary trend. Actually a technical correction is the intermediate reaction to the primary trend such as sudden decline in bull market or a sudden rise in bear market. Such interruption can last for 3 weeks to 3 months and usually retraces 1/3 to 2/3 of the previous advance in bull market or 1/3 to 2/3 of the previous decline in bear market.
In addition to above two trend there is another trend known as Tertiary trend which is due to daily fluctuation, and is not considered important by the Dow Theory.
As mentioned earlier, the Dow Theory seeks to detect the primary trend and assumes that the stock prices have a momentum of their own by which prices tend to maintain the same direction, once it achieves a primary trend. The Dow Theory says that if the market index movement is such that all successive peaks are ascending and all successive bottoms are also ascending, then there exists a primary up trend. Conversely, if the successive peaks and successive bottoms show a downward slide, it signals a major downtrend.
at May 20, 2011
Email ThisBlogThis!Share to TwitterShare to FacebookShare to Pinterest
Labels: Stock Market Lessons