When the Facebook IPO was announced few months back I was excited as I saw an opportunity to invest in a company which owns a website where I used to hangout for hours. But when I looked at the IPO details from investment perspective I was absolutely surprised by the kind of price it was demanding. Zukerberg and early FB investors wanted to cash the euphoria and hence priced the shares at $38. But any wise investor would have avoided the IPO simply because of following reasons: 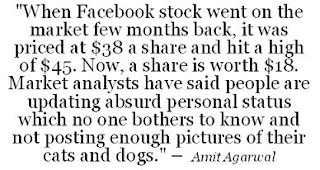 1. 0.9 billion users of Facebook out of which 20% are dormant cannot be valued at $100 billion. The users on facebook are only surfers and hence the ad revenue from those users will be as similar to a very popular blog or website in which case a valuation of more than $20 per visitor was unjustified. So a valuation of $18 - $20 billion was more than enough for the company which would have resulted in an IPO price of around $7.5 - $ 8. But Facebook went public at an astoundingly high price for a company with these characteristics—about 60-times the following year's projected earnings, in a market in which other hot tech companies like Apple and Google were trading at less than 15-times.
2. Facebook's user-base was rapidly transitioning to mobile devices, which produce much less revenue and as a result the future earnings of the company was questionable. Above that Facebook's operating profit margin was already an astounding 50%, which suggested it had nowhere to go but down.
3. At $18, Facebook is still valued at almost $50 billion and is still trading at around 28-times next year's projected earnings of $0.65, an estimate that looks just as likely to be too high as it is to be too low. Meanwhile, Apple is still trading at less than 15-times projected earnings. So you can't argue that Facebook is now "too cheap."
So what should investors do now?
In few months from now insiders would be free to sell more than 1.5 billion shares of Facebook that they had been holding for years. If we go by the valuation argument given in point no.1 and the amount of supply that could hit by year end the stock has potential to go down to $10 in next few months. Hence instead of expecting some miracle, that could make the stock go up, investors should exit at current price and wait for it to come down to levels which make sense.
at September 01, 2012
Email ThisBlogThis!Share to TwitterShare to FacebookShare to Pinterest
Labels: facebook, internet bubble