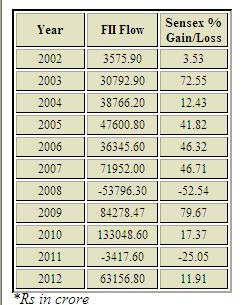 Indian Stock Markets have been highly dependent on FII money and the market performance is usually directly proportional to the FII inflows and outflows.
FIIs have invested over Rs 63,000 crore till august 2012, their highest ever investment in the first eight months and the benchmark BSE Sensex is up around 12%. In spite of highest ever inflows the markets couldn't perform that well, thanks to the Domestic Institutional Investors(DIIs) who have been net sellers during the year facing higher redemption.
However with abundant liquidity situation worldwide, there is increased probability of India receiving more inflows in coming months. If you have been looking for the FII inflows in India till date, above is the snapshot of year wise inflow of FII money into Indian Capital Market and the corresponding effect on the benchmark index Sensex.
at September 04, 2012
Email ThisBlogThis!Share to TwitterShare to FacebookShare to Pinterest
Labels: FII