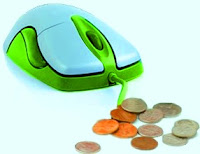 Bloggers and Google adsense publishers have been experiencing sudden fall in cost per click (CPC) rates since past few months which might have affected their overall earnings. But at the same time the click through rate (CTR) should have increased marginally partly offsetting the fall in CPC rate.
This is primarily happening due to the overall fall in the advertisement rates given by the advertisers. In the second quarterly report google mentioned that "Advertising rates, or costs per click, have headed south as users gravitate to smartphones and tablets, where Google can generally charge less than on desktop computers.The cost per click for online search ads continued to decline in the second quarter, falling 16% year-on-year but the overall number of clicks on ads, however, increased a robust 42%."
Google posted an overall revenue of $12.2 billion for the second quarter of 2012 and net income of $2.79 billion on a consolidated basis. Though the earnings for bloggers and adsense publishers might be down due to the fall in cpc rates since past few months, the good news is that google thinks that the rates have bottomed out. Cost per click is sequentially up 1% over last quarter which shows early signs of bottoming out of the cpc rates. Hence we might see an uptick in monthly earnings in coming months.
at July 20, 2012
Email ThisBlogThis!Share to TwitterShare to FacebookShare to Pinterest
Labels: google adsense