Under the category of 5000 crores plus market value, DLF and RCom has topped the chart of wealth destroyers since 2008. DLF, which had a market cap of over Rs 1.8 lakh crore in 2008, has seen three-fourths of it being eroded. It is now valued at Rs 47,000 crore.

Similarly from a peak market capitalization of over Rs 1.5 lakh crore in 2008, ADAG group company Reliance Communications has seen an erosion of over 90%. It's currently being valued at around 12000 crores. Other group companies such as Reliance Infrastructure, Reliance Power and Reliance Capital, too, have, during this five year period, seen their valuations take a huge beating.


The other wealth destroyers include companies such as Suzlon with 95% of its market cap having been shaved off and Aban Offshore with 93%, Unitech with 91%, Deccan Chronicle with 98% and Moser Baer with 98%. Similarly, state-run MTNL's market cap is now down 90% as is GTL Infrastructure by 90% and Gammon India by 93%. Among Tata group companies - Tata Communications and Tata Teleservices (erstwhile VSNL) - have seen an erosion of 70% and 85% of their valuations in the last five years. 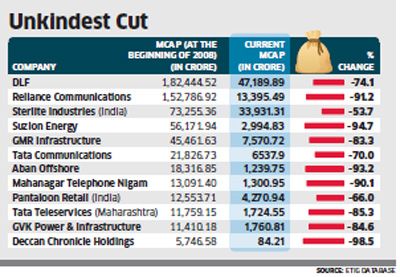