The tale of two stocks: Prestige vs K S Oils 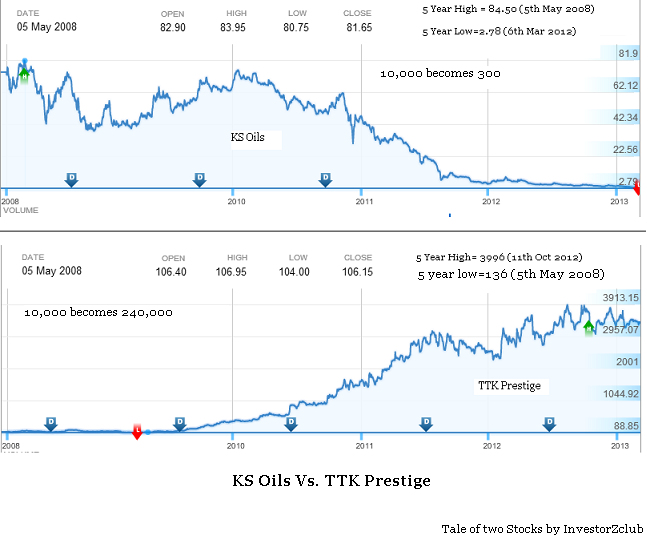 The tale of two stocks is a new series of posts for our esteemed and informed readers. I think you will find it really interesting as it tries to compare performance of two stocks in somewhat similar industry/category over a time period. This exercise is started as part of the belief that we should not focus on benchmark indices too much but rather concentrate our energy on individual stories and concepts.

In the first post of the series I have tried to compared two midcap stories, TTK Prestige and KS Oils, both of which are in consumption space. The comparison is made over last 6 year period on the highs and lows made by these stocks.

KS Oils: Once the market favorite  this consumption story fell off the cliff when promoters were alleged for wrong doings in the books of account and evading taxes. KS oil was a market leader in mustard oil with some leading brands like Kalash. Their product became so hot that the greed gripped promoters and they started cooking the books in the oils they made. News spread like fire and institutions dumped the stock which fell from the levels of 84.50 on 5th May 2008 to 2.78 on 6th March 2013 a loss of nearly 97% which means 10000 bucks invested in KS oils during May 2008 became 300 bucks today.

TTK Prestige: The market's darling for last couple of years doesn't seems to fade away anytime soon. The consumer utensil manufacturer is riding high on the consumption boom in India. The ace investor Rakesh Jhunjhunwala hold huge chunk of shares of this company. The stock has exploded in last 6 years. On 5th of May the stock was ruling at Rs 136 which went to as high as Rs 3996 on 11th Oct 2012. As on 6th March 2013 the stock is trading at 3395. So if you would have invested 10000 bucks in TTK prestige instead of KS oils on 5th May 2008 it would have been worth around 240000 bucks today an appreciation of almost 2400%.