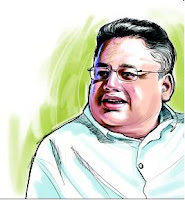 Rakesh Jhunjhunwala interview as on 4th June 2011 for Times of India - Excerpt
In 1985, when Big Bull Rakesh Jhunjhunwala entered the market with Rs 5,000 as his initial capital, his dream was to earn about Rs 1 lakh a month. Now after journeying through a little over a quarter a century, even the man himself doesn’t remember when he had crossed that dream to enter into the current realty of probably earning much more than a lakh of rupees every hour.

So when we meet the last Big Bull of his generation at his 15th floor office at Nariman Bhavan in Mumbai’s central business district of Nariman Point, naturally a good part of the conversation is about his wealth along with others like the ethics, tricks and the secrets of the trade.
Although various estimates put his total wealth above $1 billion, 51-year-old Jhunjhunwala wouldn’t reveal a specific number.
Instead his answer is a rather diplomatic and prosaic; "I have far less wealth than people think but I have much more than I need". But he is candid enough to add that the first time he was listed among the country’s richest, his father, a tax man whom the junior Jhunjhunwala idolizes, was happy about his son’s achievements. "He asked me to use more of it for charity," he says adding that that is something he has been trying to do seriously.

Whatever be his net worth, the fact remains he is the most watched man on Dalal Street. People want to know what he is buying, what he thinks of the market trends. At times there is an ‘irrational exuberance’ in a counter just because it is rumoured that Jhunjhunwala is interested in the company and its business.
It was Sesa Goa and Tata Power that he started off with in the mid-1980s, Jhunjhunwala reminisces, sitting across the corner office, which surprisingly doesn’t have any TV. What it has, however, is a lovely view of the Arabian Sea.
That’s where Jhunjhunwala, a trained chartered accountant, tasted the smell of money. Crisil, Titan, Praj Industries are some other stocks in which he has made loads of money. So is there a common thread to his stock selection? It’s his knack to pick stocks with strong under-valuations and longterm prospects. At present, "retail and banking are the sectors to watch out for," he revealed. Rather strange for a man who is known not to reveal any of his bets.
Although considered to be a Big Bull on the Street, unlike some of the discredited players in the past who also carried the same title, Jhunjhunwala doesn’t want to control the market. To a pointed question that how he is different from them, he said; "I don’t want to control the opportunity. Rather I grab the opportunity". "Greed and immaturity are the two things to avoid… I would never manipulate a stock. I know the road to Arthur Road Jail and I would not like to take that path," was his admission about his approach to the market. And since opportunities don’t come regularly, by his own admission, wealth has come to him in spurts. "It doesn’t come when you deserve it," he says taking adeep puff on a cigarette.
So we ask him what we believe many have asked him before: How does he select a stock before investing in it? There are several parameters, Jhunjhunwala says, handing out a booklet. First is to look at the opportunity. Infosys in IT, Titan in consumption, Colgate in toothpaste are some of the examples here. Then one should look for competitive advantage, like capital, branding, location, etc. "The third thing is scalability. A friend asked me do you invest in large cap or small cap. My answer is I invest in a small cap which will become a large cap. There the scalability is the key," Jhunjhunwala said. The quality of people which is difficult to judge, and the ability to generate cash are the other considerations. "And above all, it should be available at a good price," Jhunjhunwala added.
But besides the fundamentals, what is the underlying philosophy of his investments? "We invest out of ignorance. We invest in the future which is uncertain… we invest in the realms of possibility," he said. "I invest in 25 different businesses and I can’t understand them all. We go by our basic understanding. All these (investment) judgments are with half knowledge," he adds. So does luck play a part? "I believe in one thing: What I am today is because of the grace of god and blessings of my elders," he confesses.
Jhunjhunwala literally needs something to chew on while we talk. So in the middle of a couple of smokes and a round of coffee, he digs into a plate of assorted Gujarati snacks (including fafdas), followed by a plate of neatly cut apples, and rounded it up, like a good Indian meal, with a paan.
So what next for the man who made millions on Dalal Street? "(Now) the dream is to replicate internationally what I have done in India," he said. So probably, Wall Street and the City of London should prepare for the arrival of brand Jhunjhunwala.
Over the years, how many mistakes has Jhunjhunwala made? "I have made many more mistakes than people know." Some of those were while investing in unlisted stocks, currently in terms of value which constitute about 15% of his wealth. We shift the conversation on to his recent efforts to sell the A2Z Maintenance & Engineering story through its IPO, in which he was one of the investors for the last few years and offered some shares in the issue? "The market rejected what my view is." Although he has other unlisted companies to take public, he has vowed not to offer for sale any shares in any future public offers. Another mistake, he says, is not taking care of his health the way he should have.
Lately, charity is the ‘in thing’ for the world’s super-rich, thanks to Warren Buffett. What’s Jhunjhunwala’s take on this? "For me good deeds and charity are done not to bring in good luck, but they are duties." He supports a home for poor children in Bangalore.

During Buffett’s visit to India, Jhunjhunwala was among those select few who had a private meeting with the chief of Berkshire Hathaway. Was there any rub-off effect on him? "After meeting Buffett, and Bill and Melinda Gates, my charity quotient has gone up substantially". He says he intends to give ‘a good percentage’ of his wealth to charity. But how much is ‘a good percentage’? He won’t give a number, but adds, "My wife is an equal partner in our wealth and I still have to discuss this matter with her." Given that charity is a flavour of the season, it wouldn’t perhaps be too long before the man, who by his own admission has enough for himself, to loosen his purse strings.
at June 04, 2011
Email ThisBlogThis!Share to TwitterShare to FacebookShare to Pinterest
Labels: Rakesh Jhunjhunwala