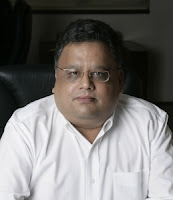 Rakesh Jhunjhunwala is likely to invest in Pipavav Shipyard through convertible share warrants. He is expected to acquire significant minority stake in the company.
Pipavav Shipyard Ltd has informed the BSE that a meeting of the board of directors will be held on 6th Sep 2011 to consider the issue of convertible warrants.
At present, the promoter group holds 45 per cent stake in Pipavav. Among public investors, Ovira Logistics holds about 7.67 per cent while Foreign Investors Institutions (FIIs) such as Smallcap World Fund Inc (6.05) and New York Life Investment (2.8) hold stake in Pipavav. Public holding in Pipavav stands at 36.23 per cent.
In the last quarter, company signed a major protocol with a company controlled by Russian ministry of defence for a potential contract of $2 billion. It also proposes to own controlling stake in Bangalore-based Conceptia Software, a ship design, engineering and consulting firm.
Pipavav Shipyard was in the news following the contract awarded to the company from Indian Navy, amounting to Rs 2,975 crore. The company has tied up with foreign partners such as US-based Northrop Grumann and UK-based Babcock Group to strengthen its presence in defence segment. The company is also in talks with six governments of various nations to build warships at company's facilities.
at September 06, 2011
Email ThisBlogThis!Share to TwitterShare to FacebookShare to Pinterest
Labels: Pipavav Shipyard, Rakesh Jhunjhunwala